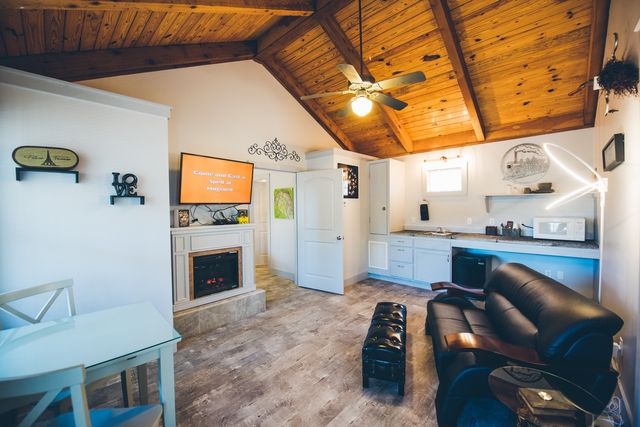 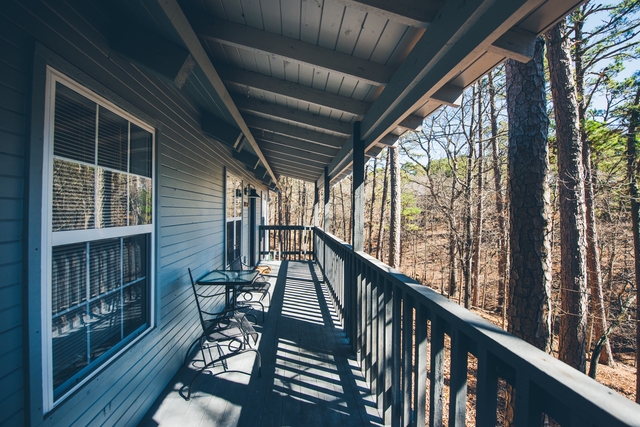 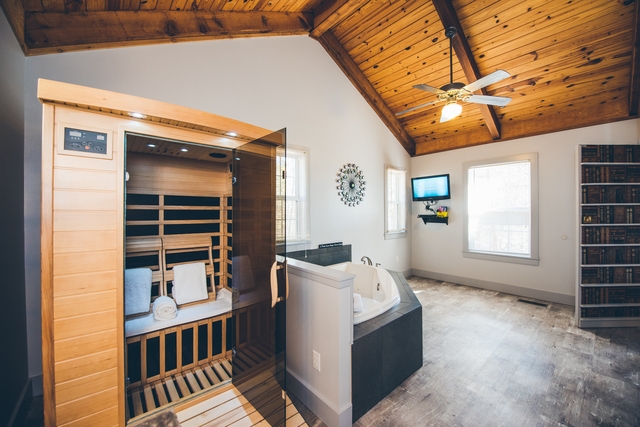 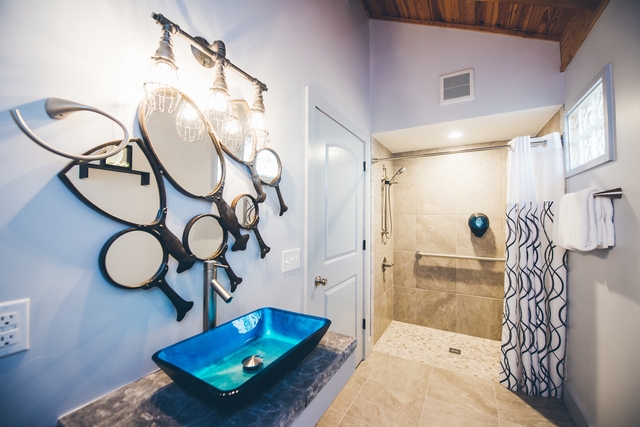 Please enter your arrival date to check availabity, rates and minimum nights for your stay.

The Ultimate Mystic Cottage offers romantic mystical suprises from the Secret Door to a Private Sauna and Jacuzzi for Two! But... what makes Hogsveil Cottages so unique is that the magic just isn't inside, there are many more surprises to be experienced throughout the village!

It took us awhile to find the right contractor and various craftsmen for the job, they had to be able to see and feel our vision. In the end we believe that was accomplished!

The "Ultimate Mystic Cottage Of Hogsveil" all feature a Jacuzzi for 2 and believe it or not a private Sauna for two!  Of Course it also comes with a Fireplace and Air Conditioning (in season only), Living Room with Cable 43" Flat Screen TV/DVD, Wireless internet.  Kitchenette with Refrigerator, Microwave & Coffeemaker with Coffee, Bedroom with a King Bed, Cable TV/DVD and a bathroom with a Tiled roll in shower.  To top it all off a private deck with a bistro table & chairs and of course don't forget the private two person sauna in its own room!

How The Four Mystic Cottages of Hogsveil came to be.....

Ben and I were shall I say… Quasi-Glamping throughout England.  For those of you who don’t know what Glamping means, it varies, but usually means you sleep in a ready-pitched tent and have hotel like amenities. Now our Quasi-Glamping means if hotels are booked or cost too much for the night you pitch your own tent and camp for a night or two, then when a hotel is available, well one that you can afford, you stay in it!

I’m fascinated with Princess Diana so on a whim we decided to explore the Wales countryside to see what she was a Princess of! Well my whim turned out to be one of those vacation stories that don’t seem so funny at the time, but long after turns out to be the most memorable part of your trip!

But first I need to digress here… In my research I discovered that it is near impossible to get an automatic transmission in a rental car in England. I thought no big deal as I grew up driving an MGB that had a manual transmission. I also knew that in England they drive on the wrong side of the road, but what I did not think through was that the gear shift would be on the other side too!

I was in tears before we even got out of the car rental parking lot! There was no way that I could drive the car and due to Ben’s eye issues he cannot drive. So Ben being the master of fixing bizarre problems, suggested that he do the shifting while I pushed in the clutch. Well it took some practice but we got the hang of it and off we went.

Anyway, back to the story… it was getting late so we realized that we best be finding a hotel or a campground. We were out in the middle of nowhere so we just kept going straight through all the roundabouts thinking one of these little villages would have someplace to spend the night. We finally saw a farmer on a ATV and flagged him down. We explained our quandary and after a good chuckle he said you are welcome to camp here, just watch out for the cowpats!  He suggested a scenic spot near the milking barn, that was just outside the fencing, so we pitched our tent. He said if we were around during milking, be sure to pop in and he would give us a tour!

We were getting hungry so we asked him, if there was a nearby village that had a grocery store. He said yes, but that he would need to draw us a map. So I gave him a pen and paper and he is making all these marks and circles and talking a mile a minute and then handed me the paper and says, “It is really easy to find.”

Okay… so we start out and we have our right turn signal on and we see his ATV coming up behind us and he is shaking his head and points to the left. I mean how are we supposed to find this village if we can’t even understand the map enough to get off his property! How we got there I have no idea, but about 30 minutes later a sweet little village pops up around the bend.

Oh my gosh… it was like one of those mythical fairy tale villages that were in the books that my mom used to read to me as a child. It was a true timeworn English Village with quirky little shops. There was a bakery, grocery store, flower shop, even a magic shop and to top it all off a medieval fortress!

We ate at the bakery where the sweet little lady just couldn’t stop telling us about all the different proprietors in the village. Listening to her was like listening to an audio version of Harry Potter, we were captivated. She suggested that we visit all the shops and not to forget the fortress. Well we did exactly what she suggested and every shop owner was just as eccentric as she was.

I didn’t think it could get any better… but then we walked up to the fortress. It was fascinating with all its cobbled passageways with knights as its guardians, it felt like we were on a Harry Potter Movie Set! We were memorized by a fresco on a wall and right next to it was a knight in shining armor, which I thought was just a shell. WRONG… it moved and I just about came out of my skin.

Well it turned out that the “Knight” was part of a guided tour that you can book ahead of time. We lucked out as his tour group cancelled at the last minute, so he offered us a personal tour!  He kept saying, that this and that weren’t normally part of his tour, but it was things that he also found interesting. The most fascinating thing was when he took us into this huge hall which had these hidden mirrored panels and you could see into the next room without the people in the other room being able to see you. He said that the king wanted to know what his servants were doing without them knowing it. Geez… I’m thinking this has Harry Potter written all over it…?

Anyway, it is getting late and we’re pretty sure we missed out on the cow milking, which is a disappointment, but we think hopefully we’ll be able to catch it in the AM. So we start back to the car and I ask Ben for the map and he says I had it. Well we won’t hash that conversation up, but needless to say the farmer’s map was nowhere to be found. We tore the car apart and then retraced our steps to all the shops we had visited, but with no luck.

So we go back to the bakery which is now closed but the lady is still inside, we ask her if she knows where the dairy farm is. According to her there were no less than 25 dairy farms in all different directions. All I could think of was why did we pitch our tent… as now we for sure had to find the right dairy farm! The Toy Store proprietor came over and suggested that we call some of the farms and ask if they were the one that we were staying at. Luckily the Bakery lady had a list of customer phone numbers, so I sit out on her stoop and try my cell… of course NO SERVICE!

So I go back inside and ask if I could use her phone.  She says, “Love, there is just one phone in town and it is in the box.” I’m thinking to myself THE BOX?  She points the way, and off we go. As we are walking the missing map comes up for discussion again and once again we start bickering about who had the map last.

We round the bend and the infamous big red telephone box appears, with old dial phone and all! I step inside and the phone starts ringing, I’m looking at Ben like what is this. Of course he says, “Aren’t you going to answer it?” I do and the caller says, “Dorothy if you please.” I explain that she isn’t here and then he asks if I can write down his pie order. So I take my backpack off and I say just a minute as I have to find a paper and pen. He says no need for that, just write it on the message board. I look up and sure enough right in front of me is a huge dry erase message board with LOTS of messages, there was even one for Aunt Gurtie! Anyway, I write down what he wants and he says, “Cheerio!”

So now I’m ready to start making my calls when Ben says, “Oh I found the map in my secret pocket.”  No comment…

It was a bit easier getting back to the farm than it was getting to the village. We’re all tucked in and the cows start mooing… I mean ALL NIGHT LONG! Well it wasn’t all night as at 4:30AM, we are WOKE UP to LOUD tunes of Tom Jones! “What’s new Pussy Cat… whoa whoa whoa oh...”

The farmer explained to us that playing, as he calls him “Sir Tom Jones” music makes his cows happy, which in turn gives him better quality and more milk! I guess it also makes them smart as they all lined up in perfect order, with no one cutting in line, although there was this one cow who stood right outside the door and keep peeking in and then finally after about 20 cows were milked, she just walked right in. The one cow that we thought was next in line stood back and let her go first. We asked Phillip about this and he said they all come in the exact same order at every milking and that one particular cow always stands right at the door peeking in until it is her turn and the other cow always stops and lets her go in.

What an experience Wales turned out to be! As Ben and I are driving off, we just looked at each other and couldn’t stop laughing…  I bet Princess Diana never experienced the “Sir Tom Jones Serenade!”

Anyway, that is how our little lodging establishment became Hogsveil…
There are no cows and Sir Tom Jones won’t be serenading you, but our sweet little village of Hogsveil reminds us of our adventure through the Wales countryside!

Rates are as posted.

You can check Availability & Rates online.
The Availability Button is right above pictures on the right hand side.

GUEST COMMENTS: (Please also see "Guests Comments" Under the Information column at the top of this page.)

We know you are busy and may not want to spend a lot of time reading fluff…so we’ll try to give you the short version up front and then if you want to know more you can browse this site and find out just about everything there is to know about our new exciting lodging in Eureka Springs, Arkansas!

"my husband & I eloped here just last week, and it was amazing! we bought the ultimate wedding package & it exceeded expectations!! From the welcome snack basket, to the jacuzzi basket of goodies, to the romance package we bought (which included roses & candles everywhere!) everything was[...]"
~ BayLee and Nick Harris